We love it. We love to hate it. (Hate is a strong word, I know. And we all love our children. You get the point.)

We can’t live without it.

And sometimes, it’s downright impossible to live with.

i currently have two toddler humans living in my home.

And let me tell you something- it doesn’t exactly get easier. I keep hoping, every day when I wake up, that it will. And some days, they present me with a false light-at-the-end-of-the-tunnel moment- like when Monkey finally said “I love you” back to me after trying so many times to get her to say it. Granted, the I love you is usually followed up with an eye roll- and now that she knows how to say it, 3/4 of the time she makes a conscious decision not to. She’s too good for me, obviously. As for Bear? Half the time, she’s no better- she’s always moving at 2x her normal speed, trying so hard to keep up with Monkey. She even throws herself on the ground just the same as her older sister- so most of the time I’m left standing perplexedly over two toddlers, melted into a crying puddle on the floor over some minor incident. Always my fault, though.

Let me tell you something- people say that terrible twos aren’t real. I challenge them to meet pre-two year old Monkey and post-two year old Monkey. The attitude, the fits. Even the eye rolling- all of that came sometime shortly after her transition into a big, bad two year old. Her newest thing that’s started within the last week and a half or so? “I said no!”

She blurts it back to me, like all the times I’ve told her before. Her favorite time to do it is when I’m not expecting it- like a few nights ago, when I was trying to get a hysterical Bear to fall asleep. I had resigned to laying in her toddler bed with her, rubbing her hair to try to calm her. All of a sudden, the bedroom door cracks open and-

I about lost it. Poor Bear was stuck in the middle of the nonsense, too. I sent her away and tried to resume calming Bear the best I could. I must’ve thought, back then in my fog of pregnancy, that toddlers would be so super fun. Because the way that the girls were born, C and I are due for three straight years of terrible twos. Hooray!

sleepless nights, attitude for days, and tantrums? these are CHILD’S play (literally)

There are some nights that I know, with every fiber of my being, that the big girls are exhausted. However, an additional two hours spent running around, practically scaling the walls of their shared room? That’s nothing. That’s their warm-up. Next come the laps around the beds, the yelling, the conversations in some mystic toddler language that I’m sure I’ll never learn to translate.

Ya’ll, there are things that happen that I literally never even dreamed of, in my WILDEST dreams, when I imagined parenthood.

The other day, Monkey had somehow undone one side of her diaper, unbeknownst to me. She runs up to me, holding a diaper and wipes- my first reaction? A smile. How helpful! How sweet! She knows she’s got a wet diaper, and she’s communicating that to me!

how foolish of me to trust a toddler.

I sit down to change her and-what’s this? Hanging from her shorts?

For those of you who don’t know what a dingle berry is, I’ll spare myself the horrid task of writing it out and simply direct you here. But yes. There was a dingleberry attached to her shorts. I pull them down, avoiding the poop as much as possible, because yes- even after two years, I still don’t like poop. Sorry not sorry. As I reach her diaper, I see the tab undone- and then, lo and behold, no poop in the diaper. My hopes got raised again- so foolish. Less than a minute later, on my way to the trashcan with said offensive diaper, I notice something on the ground.

And then another. And another. She had left a trail of poop behind her- I could see everywhere she had been in the last few minutes. There was some behind the couch, some hidden behind the baby swing- I’m honestly not even 100% sure I found all the nuggets, but I did my best.

who is this monster, and where did my baby go

She refuses to eat sometimes. She’ll bring her sippy cup to me, demanding water. I happily comply, only to have the cup thrown halfway across the room in a fit of what seems like absolute disgust. So, unless “water” means something else, it must just be me that messed up.

And you know what else? It’s like nothing matters. Nothing phases her. Time out? Nada. Us getting upset? What a joke. I’ll serve something I know she loves and if it wasn’t presented properly, she’s writhing on the floor, yelling for no apparent reason. I’m clearly the worst mom in history. God forbid that she sees a familiar snack bag, because it’s all downhill if I say no to having said snack at that very moment.

Sometimes I don’t know where I went wrong- or if this is all normal, and I’m supposed to just ride the wave the best I can and hold onto the edge of the boat like my dear life depends on it.

She plays in the toilet. She knows how to open doors, so pretty much anywhere is free reign at this point. I don’t have a single safe space in my house, and that’s terrifying. I’m sure I could lock the door, but knowing her, she’ll find a way in. It’s only a matter of time.

That is…until I have a three-nager. 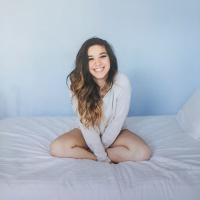 Previous Post: « Mom Guilt: The Epidemic
Next Post: The Simplest Way To Make The Best Of Life Changes (After Kids) »

A pretty common objection I get is not having time

In case you didn’t know, today is “World Compl

Any other Office fans out there? 👀⁣ Cody & I

Just your friendly neighborhood tired momma in my

Less than 25 days before I become Mrs. Young, and